The Italian Tiramisu means “pick me up” or “make me happy”, and nothing makes me happier than the kick I get out of the caffeine from the espresso and cocoa powder, the two dominant flavors in this dessert.

Tiramisu is not a difficult dessert. It's just an assembling of ingredients and the taste entirely depends on the quality of these ingredients. I've split the recipe into three parts: the sabayon, the body of mascarpone with sugar, and whipped cream and whipped egg whites. Simple! 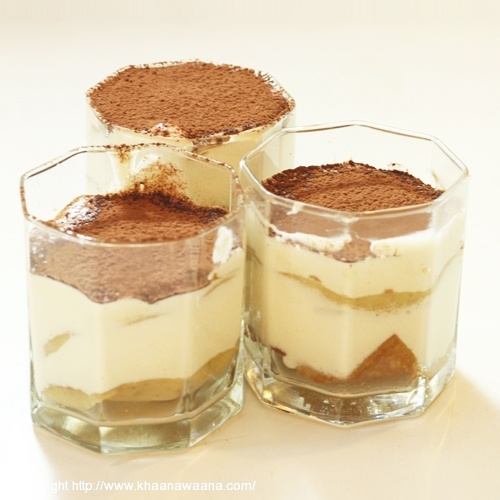 For the Mascarpone Body

For the Whipped Cream

For the Whipped Egg Whites

For the Dipping Liquid

by Karan Rathod , on Friday, 04 October 2013
good recipe, very few understand the importance of sabayone....only one pointer here....authentic recipes do not contain rum or Kahlua, it should contain Marsala wine,,,available in Natures basket. If using rum; dark rum is better in flavor , Bacardi white rum is a NO NO... Brandy is also an option.....In india pound cakes have a very eggy flavor, hence i prefer sticking to lady fingers.... Overall fantastic recipe . I wish to learn a good pound cake recipe...
Top