SKKY Review: The Food’s Bang on but the Lounge Needs Some Spice

Posted by Manisha Sharma on Monday, 11 November 2013 in Reviews 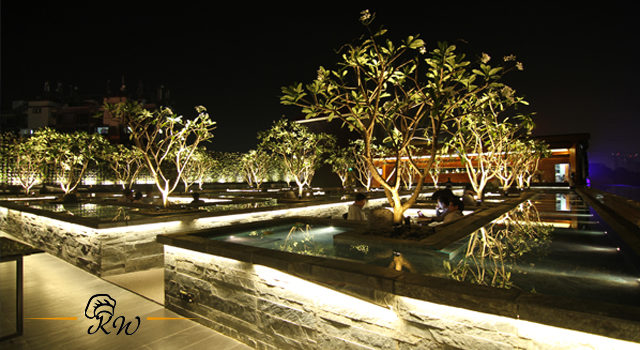 SKKY is Ramada, Powai’s new open-air rooftop lounge bar, removed from the city buzz, if that’s the sort of thing you like.

Since it only opens post 5 pm, you have no choice but to wade through evening rush hours to get there. Leaving the homebound traffic behind, we take a narrow road through the Mhada-Aarey Milk Colony area to get to SKKY.

The desolate approach to Ramada finds company in the perceptible listlessness in the air as we wheel past the hotel gates. The day’s proceedings - Ramada is primarily a business hotel that hosts conventions - have long wrapped up. But SKKY, a longish, al fresco lounge dotted with bottom-lit trees and edged by shallow water features on which artificial water lilies are set adrift – is an island of light and activity.

SKKY is Ramada's attempt at an image makeover - from a stuffy conference venue to something more alive and buzzing. The shoulder-high ledge running along the tables skilfully walls off SKKY from its sleepy surroundings and the view of shanties below. What you have instead is an open night sky safe from the neon, the bar at one end and a live Teppanyaki counter on the other. You could be anywhere.

If I wasn’t there to review the place I would have spent a large part of the evening just sitting at the Pan-Asian bar sipping a tall glass of their zesty, cooling Mandarin Mojito - a Bacardi rum-based cocktail with lemon wedges, mint & kumquat wedges, abeautiful coming together of colours and flavours.

Seventy per cent of the menu at SKKY is Chinese, Thai, Malaysian, Japanese, and about 30-35% menu Indonesian and Vietnamese. At SKKY, Japanese Teppanyaki and sushi is served alongside Indian Jain cuisine. They also serve pizza and popular Indian dishes for those who will visit SKKY just for its ambience, space and service, SKKY’s Chef De Cuisine, Rohan Koppikar, says.


Starters: Dimsums & then Some 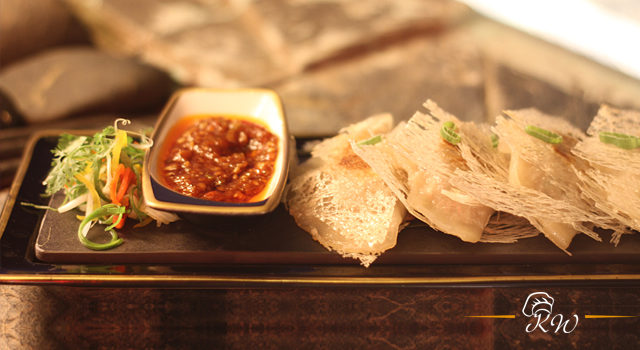 But we were at SKKY to taste the best of what they had. It began with a round of Dragon Tequilas and a line-up of dimsums cradled in bamboo steamers. First to arrive were Sichuan Mushroom Dimsums -- steamed dumplings packed with three kinds of mushrooms - fresh mushrooms, shitake & portabella - the meaty texture packed in delicate flavours.

The Juicy Lamb Kothe dumplings with flavoured lamb mince, fresh coriander and scallions had the beautiful softness of the lamb, complemented by the crispiness of seared rice paper sheets that covered the dumplings – a nice play of textures. 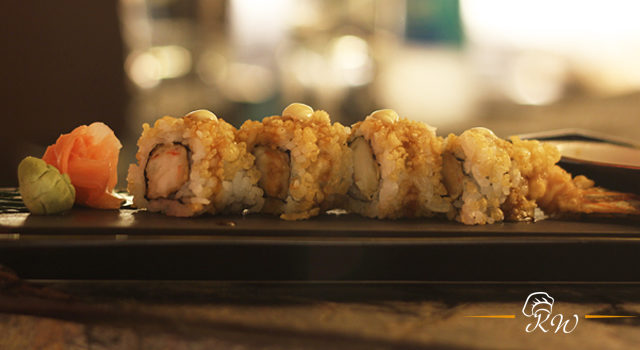 Chef Rohan told us their carefully crafted menu – the SKKY launch was delayed by a year –introduces dishes you won’t find in many Pan-Asian establishments in the city. The Tem Maki Roll - tempura flour-coated crisp baby tiger prawn fritters, wrapped in Japanese mayonnaise and sushi rice, coated with crunchy wonton strips – is a good example. These were served with wasabi, pickled ginger & Kikkoman. Now, things were beginning to get interesting! 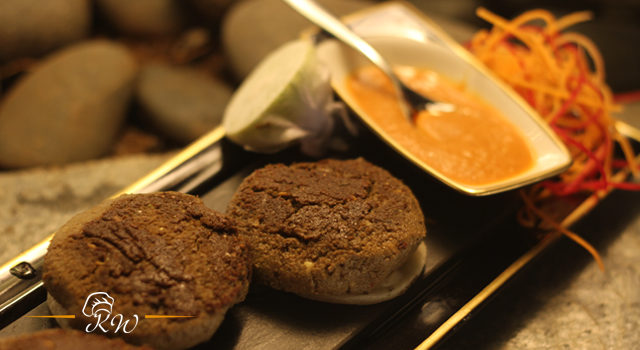 Before the main course, we were given a sampling of the pizza they say is the best in Mumbai and their Mughlai fare. The pepperoni thin crust pizza was a passable distraction but the Mughlai Kalezi Ka Kafia – melt-in-the-mouth liver kebabs infused with saffron clarified butter - were tender, delicious reminders of Lucknowi Tunday Ke Kebab. It was plain to see - SKKY is refreshingly unapologetic about the meat flavours in their dishes, not masking them in any of the cuisines, Indian or Asian.

Back on Course with Limoncello

We came back to Asian main course with a Lemon Margarita made with Italian liqueur Limoncello to clear the palette. Though this liqueur is typically served as an after-dinner digestive, for us it was a passage into the Teppanyaki counter.

Teppan means iron plate, and yaki is grilled, broiled, or pan-fried, Chef Rohan informed. Each ingredient is perfectly chopped and diced to a particular size and shape as that determines their cooking temperature. 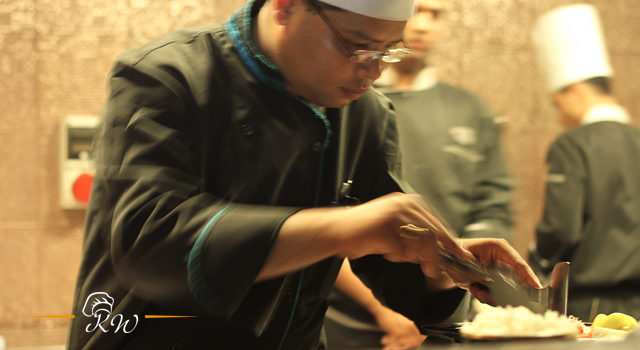 At the Teppanyaki bar, Teppanyaki chef Vikas Rane tended attentively, and it has to be said, lovingly, over the meats and veggies, without losing the performative streak, flambé and all. In an artful display of dexterity, he wielded two metal spatulas adroitly over the shining Teppan, cutting, stirring, seasoning and dividing each diner's portion onto plates. He then pulled out one of the egg tricks from the old repertoire - stacking one egg with punctured top above the other, three in all.

First to arrive from the Teppan was the Teppanyaki Egg Fried Rice -- Japanese sticky rice cooked with vegetables and egg. This was followed by Teppanyaki Salmon, golden seared, seasoned with fresh lemon & Terriyaki sauce, flambéed with white wine. With that came Teppanyaki Chicken Breast, and the Teppanyaki New Zealand Lamb Chops, glazed with lemon & Kikkoman soya, between medium to well done. The New Zealand lamb chops are among the best meats available at SKKY and were respectfully treated for its flavours. They  were juicy and melt-in-the-mouth but will probably suit those with an acquired taste. 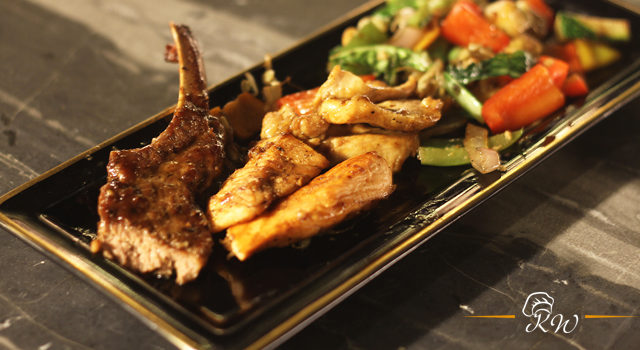 Ice Creams Worth Driving all the Way For

After hours and hours of trials, Executive Chef Rohan Koppikar has created some exotic in-house ice creams that come in intriguing flavours - paan, kiwi and basil, machaa, dulce de leche and kaffir lime all without preservatives and emulsifiers which make them smooth and creamier, yet light. Each one is unique and each one worth battling the traffic for. 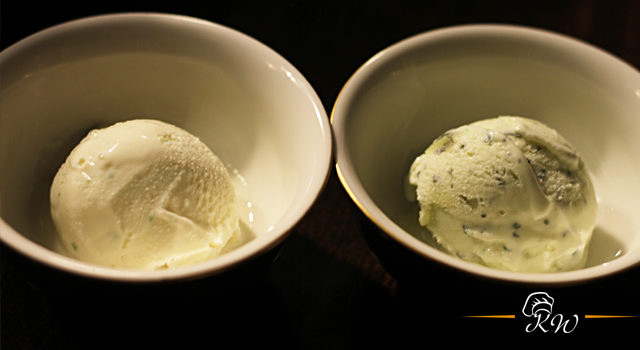 Nothing at SKKY distracts you from your experience – the music is understated, the attentive staff tip-toe in and out. But perceptibly missing was excitement, some buzz and glamour, some ratting of plates, a drunken laugh, even a few kids running around. That took a little something away from the dining experience. But if a romantic yet gastronomically satisfying meal is the plan, SKKY may be the right fit.

Price: A three-course meal for two (without alcohol): Approx Rs. 1,800

I am also listing some authentic and offbeat dishes from the menu for those who are always in search of classic and real.